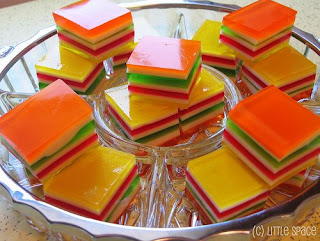 I don't consider myself to be an independently creative person. I prefer to follow instruction, or to branch off of an idea already created. This rainbow Jello is perfect for my methodical ways because its not limited to a rectangular, 9x13 dish - I've seen quite a few different containers used for this popular recipe including wineglasses, lab glassware, bowls...the list is as long as there are vessels that can hold liquid!

The first time I made rainbow Jello we brought it to a family gathering where it was rapidly consumed by kids of course, but also by intrigued adults who tried to peel apart the individual layers.

Bring this to the next potluck or gathering you attend - its guaranteed to put a smile on everyone's face!

Mix each Jello color in its own bowl. Do not prepare according to package directions; instead follow these steps: for each package of Jello, add 1 tablespoon of gelatin and 1 cup boiling water.

Pour first color into 9x13 dish. Refrigerate till firm. Add 1/3 of white mixture next, ensuring that it is added slowly so the pouring action does not create a tear in the layer below. Refrigerate till firm. Repeat till all Jello mixtures have been used. Refrigerate 1 hour before serving.
Pin It
Posted by Rina
Email ThisBlogThis!Share to TwitterShare to FacebookShare to Pinterest 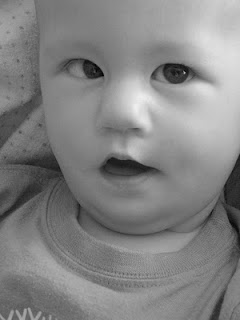