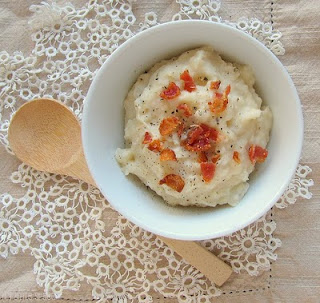 Southern BC is currently going through a cold front - we had our first snow a few days ago and it's been severely windy and cold since. I don't mind the cold but that wind! Straight to the bones. Broke out the crock pot for this potato chowder.

I've always thought of clam or corn as being 'the chowders' but after doing some research learned that "chowder is any of a variety of soups, enriched with salt pork fatback and thickened with flour or more traditionally with crushed ship biscuit or saltine crackers, and milk; however, the most accepted etymology for the word chowder comes from the cooking pot in which it is cooked, known in French as a chaudière."

So, potato chowder. It's definitely thick (could even be eaten with a fork), extremely creamy and rich from cream cheese. I've made it with the bacon and onions sauteed together and stirred directly into the crock pot but this time left it quite plain, garnishing simply with cooked and crumbled bacon, no onions.

I usually make double the recipe shown below and freeze half; it is easily reheated over low heat with a bit of milk or cream added to loosen things up.

Cook bacon till crisp. Let cool then crumble and set aside.

Combine chicken broth, soup, and potatoes in crock pot. Cover and cook on low 6 to 8 hours or until potatoes are fork tender. Mash till mostly smooth and add cubed cream cheese; stir to melt and combine. Season with salt and pepper and garnish with crumbled bacon.